As a charity its always great to support local community groups and individuals, as volunteers I think we are right in saying we get a sense of satisfaction. 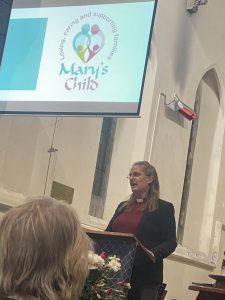 Something even more satisfying is when we get to see first hand what a difference our support is making to the lives of individuals. 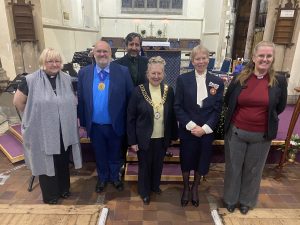 Hosts, Supporters and Guests in Church

On Sunday 28th November, our president Lion Rags Sandhu and his wife were both invited to attend the 4th anniversary service of Mary’s Child Charity Greenhithe. This charity supported by Dartford Lions Club has now become a key part of the local community. Initially starting with their community cafe, Mary’s Child now donate and deliver furniture, food, clothes and legal support to those members of the community who fall on hard times. In addition to organisers and supporters of the charity, the event was attended by the Mayor of Dartford, Leader of Dartford Borough Council and Lord-Lieutenant of Kent, Lady Colgrain. Hosted by Rev. Charlie in St. Mary’s Child Church, a particular address was made to the congregation by a ‘first hand’ recipient of the charity’s support. In his address, John explained how personal circumstances resulted in him losing all his finances and any financial support, “Mary’s Child gives hope”, using these powerful words John continued to explain how through their suppport he has now connected with his faith and is now working with the charity to help them deliver furniture to those who need it.
Lion president Rags Sandhu said ” The charity’s slogan ‘ Loving, Caring and supporting Families’ sums up everything they do. These few words have made such a difference to the local community. Dartford Lions Club is pleased to support groups such as these who are a vital part of our community”. Through the success of their work, the charity now also operates in Peterborough, this is a true testament to their work.
Tags : Charity DonationsCommunity in KentDartford Lions ClubMarys ChildRagbhir Sandhu