Our support to Ukraine Lions Club

With the situation getting worse day by day in Ukraine, members of Dartford Lions Club reached out to their opposite number in Ukraine. Much to our surprise, the Lions Club of Kyiv, responded almost immediately. 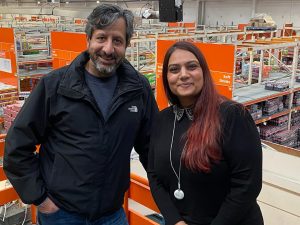 Kyiv Lions requested medical supplies and toiletries for all age groups. Our 2nd Vice President, Lion Ellenor Palmer and her friends decided to drive their horse box full of supplies over the channel to help with the aid effort.

Lion Ellenor started a ‘Go Fund Me’ page which raised approx £1800, in addition to this, our club supported her along with members nd residents from Dartford and beyond in collecting toiletries and much needed supplies.

Our club president, Rags Sandhu said: “About four years ago as a local Lions club we started to support Belarus, sending clothes over to their orphanage and generally because the economy is not great over there. 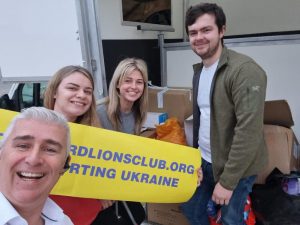 However, due to the unrest in Belarus we had no option but to hold onto the clothes here in Dartford. However, through the efforts of the British Red Cross, prior to sending over the medial supplies, we had delivered one complete van load of brand new clothes to Atik night club Dartford, they were the British Red Cross drop off point for Ukraine.”

Lion Ellenor and her team drove round various parts of Kent buying and collecting medical supplies, whilst president Rags Sandhu and 1st Vice President Avtar Sandhu MBE negotiated some free nappies from Booker Wholesale and purchased approx £800 of items themselves.

Using the the Lions base on Heath Lane Dartford as a drop off point, we had some residents deliver baby food and more to be loaded into the horse box heading for Ukraine.

Once they set off, the team had organised meeting members of the Polish Lions Club who met them on the Belgian border where the transfer of goods took place. The Dartford Lions Team were created by various volunteers at the boarder all of whom were very grateful for their efforts. The team arrived just in time for a candle lit vigil in memory of all those who have lost their lives in the war.

This is just one of the many occasions in which Dartford Lions Club have supported international causes, our support of the Ukranian relief effort continues on an international level through Lions Clubs International. Please feel free to contact us about offering your support or simply to learn more about what we do as a charity.