Founded in 1969, Dartford Lions Club (CIO), have elected their president for the year. 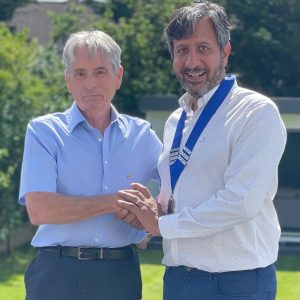 Having previously served as president last year, Ragbhir Sandhu (Rags) is extremely pleased to continue his work as the country comes out of the restrictions imposed on us all. Since joining the club in 2014, Ragbhir has been a key asset in modernising the clubs website and social media.  These combined with his role in public relations within the club, has resulted in the clubs profile and presence growing within the community.

Outgoing president Milne Davidson said ” Its been a pleasure serving the club, my role as secretary will continue and we are fortunate to have a great team of members and supporters whom I’m sure will continue to allow the club to grow. I wish Ragbhir great success in his 2nd year as our club president.”
Due to the pandemic, the club’s biggest fundraiser was cancelled last year (Dartford bonfire night and firework display). So the club moved quickly online to allow donations still to be made through the clubs website, this along with their collection ‘pots’ at various outlets throughout the borough allow the club to continue their support for vulnerable groups/individuals within the community. 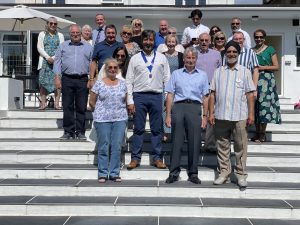 Lions president Ragbhir Sandhu said “I feel privileged to have been elected to serve a second term as president. Our club is only as good as our supporters and members, I thank you ALL for everything you do to allow Dartford Lions Club to continue supporting the local community. Members feel a great sense of satisfaction when we see the difference our support is making to people’s everyday lives.”
The official handover of the presidency was attended by club members and also District Governor Lion Ian Forbes and Zone Chairman Lion Ranjit Deogun.
Interested in joining Dartford Lions? Why not contact us?
Tags : Charity DonationsCovid19Dartford Lions ClubMilne DavidsonRagbhir Sandhu